A sticky tangle: SPIDER-MAN 3 and beyond... 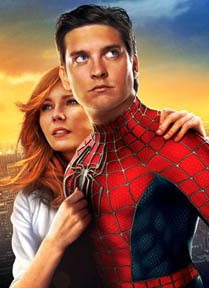 may well be the weirdest superhero movie ever. Yes, even weirder than Ang Lee’s 2003 misfire, HULK

, which was at least interesting because of its bizarre eastern-sensibility meets western pop culture tenor. That Sam Raimi went so far off the deep end with Spider-Man’s third installment (especially after crafting a pitch perfect second film) makes it all the more confusing.

First of all, while there’s a tendency for female leads in superhero films to mistakenly refer to the project (as Kim Basinger did in every interview for BATMAN

) by saying, “It’s a love story,” this movie truly is; the hearts of the characters take center stage. Peter and MJ love each other and Harry and Harry loves his father and MJ and ultimately Peter and Aunt May loves everyone and the Sandman loves his daughter and Eddie Brock loves himself and ENOUGH ALREADY!

And then there’s all that crying. I mean, Jesus, EVERY SINGLE MAJOR CHARACTER with the exception of J. Jonah Jameson weeps at least once in this film. Spidey cries (a lot). MJ cries. Aunt May cries. Harry cries. The Sandman cries. Uncle Ben cries in flashback. Even freakin’ Venom cries! Maybe the symbiote suit works better for the web spinner. He wears black on the outside because black is how he feels on the inside!

But if S3 is a romance first, it’s a musical second. From the opening scene, with MJ’s awkward crooning on Broadway, the tone is off. I could practically hear the kids squirming in their seats as they tried to deal with a scene better suited for the Thin Man than Spider-Man. And while I did enjoy Dark Peter’s Maneroesque strutting montage, I wasn’t prepared for his humiliating (in more ways than one) dance routine at “the Jazz Club” (great name). 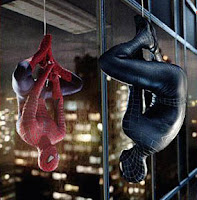 Believe me, I appreciate that Sam Raimi’s esthetic is different from Michael Bay’s. I like that he’s an old school filmmaker with a quirky style and a weird sense of humor. I appreciate his off beat casting and attention to detail. I like that he brings a retro feel to very modern movies. But he totally lost the balance this time. There’s very little that’s super in this superhero film.

But even the action in this movie is pretty bad. The FX scenes are all so jumbled with hard-to-read, yet obvious CG that they carried no oomph at all. I can barely even remember anything from any of Spidey’s various fights with any of the villains. The only really exciting sequence involves the runaway crane. I jumped in my seat as the various pieces of building and office furniture came crashing onto the streets of Manhattan. So how come when Spidey swoops in, all he does is save Gwen Stacy and then swing away? Is that poor crane operator still stuck up there? It’s such a missed opportunity. Like much of the movie.

SPIDER-MAN 3 ironically falls into the standard superhero movie traps that the first two Spidey films so smartly avoided. The main one being, of course, too many villains. One gets the sense that Raimi only wanted the Sandman and the New Goblin, but the studio got tired of having too few characters to license, so they pushed him to include the fan-favorite Venom.

Now, I’m about the same age as Raimi and it seems as if we had a similar relationship with Spider-Man. I read Spider-Man regularly from approximately 1973 through 83, which means, like Raimi, I was long done by the time Venom was introduced. It’s already been widely reported that Raimi wasn’t interested in including the character, as Venom wasn’t a part of his nostalgia either, and it shows. Even I could tell the character was underdeveloped (and I don’t mean physically).

You could also feel the egos of the leads on display, no longer willing to sublimate their faces to masks. Spider-Man spends more time with his mask off than on (I guess the people who saw his face on the subway, uh, el train he saved in S2 promising to keep his secret identity gave him an exaggerated sense of security) and the new Goblin actually has a mechanism that allows his mug to be on display… to what end? Hey, lookit me! I’m Harry!

I know, I know, Superman puts on glasses and nobody knows he’s Clark Kent, but every movie, especially a genre film has its own internal logic, and suspension of disbelief is a relative thing. So we can buy that a kid bitten by a genetically altered super-spider takes on its powers and abilities. Fine. But Peter Parker’s just a bit to blasé about using his Spidey powers in public (the web in Central Park?). Also, the alien symbiote just happening to crash land near Peter Parker’s moped and Eddie Brock just happening to be in the same church where Spidey’s ripping off the costume in the bell tower are too coincidental to buy.

Anyway. It’s just sad to see a once great franchise fall so far. You know it’s a weird superhero movie when the most memorable part of it is Bruce Campbell’s cameo as the funny French Maitre D’.

I can’t help but compare this film to SUPERMAN RETURNS

in how it’s being received by the general public, far more accustomed to slam-bang action in a superhero movie than any kind of emotional heft. The impatience of the audience was palpable at the sold out showing of SPIDER-MAN 3 I saw, to the point where people were leaving after the action ended but before the movie was over. And I get the feeling that, record breaking opening weekend aside, this movie is going to have terrible word of mouth and fade pretty fast.

Still, that crazy money of the opening weekend pretty much guarantees that we’ll see SPIDER-MAN 4, but based on the ennui that the principals have outwardly shown during the press junket for this one, it seems unlikely they’ll be along for the ride. Which means that 4 could well be the BATMAN AND ROBIN

But, assuming there will be another, where does Spider-Man go from here? 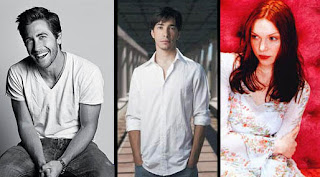 First and foremost, who could take over for Tobey Maguire, Kirsten Dunst and Sam Raimi? While I always thought Maguire was good casting and did a great job, it does feel like someone else could fit under the mask. Jake Gyllenhaal (once rumored to take Maguire’s place when he hurt his back before S2) would actually be okay. What about Justin “I’m a Mac” Long? It’s too bad Daniel Radcliffe isn’t a little older, he’d be perfect (you watch, though, it’s gonna get offered to Shia LaBeouf)... For MJ, I’ve only got one pick: Laura Prepon. And behind the camera… maybe KUNG FU HUSTLE

’s Stephen Chow or, call me crazy, but I’d like to see what Richard Linklater would do with a comic book movie, especially one with a geeky outsider as its hero.

Now that the precedent has been set of multiple villains, it seems unlikely they’ll go back. So I again have to suggest aping Bond films and including an all-action pre-credits sequence with a lesser villain who requires no exposition, but allows for the requisite merchandising. Have 4 open with Spidey in an all-out bash with the Rhino or a sparky confrontation with Electro that concludes quickly and doesn’t clog up the main story.

So who could be the next major villain? How about Kraven the Hunter, who comes to Manhattan to stalk the web-slinger and releases a bunch of wild animals from the Central Park Zoo to give Spidey something new to battle? Maybe Clive Owen or LAW & ORDER’s Christopher Meloni? Maybe the Kingpin could be done right, erasing the memory of the abysmal DAREDEVIL

(too bad James Gandolfini would never touch it). If Mary Jane’s acting career picks up again, she could get a movie gig and become the object of obsession of a re-worked (and redesigned) Mysterio, a special effects guy turned villain in the comics.

Regardless of Dr. Curt Connors’ appearances in the film (played by Dylan Baker), it seems as if his transformation to The Lizard might be too much of a stretch for a movie. Similarly, while I’ve always liked the character of Morbius the living vampire, he also doesn’t seem like a live translation would work. And despite the fact that at one point, Ben Kingsley was in talks to play the Vulture in S3, trust me, it’s a good thing that didn’t happen.

Maybe it’s time Spidey fought a female villain… of course, his primary female adversaries (at least the ones I know) ended up being more anti-heroes than villains (much along the lines of the Catwoman). Still, it’d be nice to see him tussle with Medusa, the Black Widow or (most likely) the Black Cat (may I suggest Rose McGowan?).

The notion of Spider-Man teaming with a Marvel B-lister could bring something fresh to the franchise. While there aren’t too many of Marvel’s big name superheroes left to be optioned for film or TV, there are a handful of Marvel Universe dwellers that could work. Dr. Strange, the master of the mystic arts, is a good enough of a character to headline his own movie, but he’s also a great foil for ol’ Web Head (my favorite team up of theirs remains the 1973 Buddha Records Rockcomic, “From Beyond the Grave

” in which the Kingpin kidnaps Aunt May in order to force photographer Peter Parker to bring him Spider-Man, who teams with Doc, who ends up sending the villain to Hell!). Dr. Strange (a fellow Manhattan dweller) could bring something otherworldly to the series, breaking fresh ground for Spidey (besides, he was also, like Spidey, co-created by artist Steve Ditko). And Hugh Laurie would be perfect.

Spidey and the Human Torch have always had a cantankerous but brotherly relationship in the comics, and the prospect of Chris Evans from the FANTASTIC FOUR

movies (the only good casting in those films) trading barbs with Peter Parker is intriguing. But considering that Spidey is produced by Columbia and FF is a 20TH Century Fox franchise, that seems unlikely.

If Sam Raimi is truly done with ol’ web-head, however, it is inevitable that one super villain, first featured in SPIDER-MAN #2 in 1963, will be the one to rear his ugly head: The Terrible Tinkerer. Only he’ll be behind the camera.