We’re gonna bet that “Lucky You

, Nevada. Everything about the setting, from its desert isolation to its gaudy neon glow to the non-stop drama (that really doesn’t stay there) makes the real Sin City one of the most distinctive settings for movies there is. Picking the top ten Vegas movies is a roll of the dice, but we’ll stand on these.

(1995)
It’s the Cinderella story of Nomi Malone (the bizarre Elizabeth Berkley), an exotic dancer who battles the evil Cristal Conners (Gina Gershon) to claw her way to the top of the Vegas show-world! Granted, “Showgirls” is widely considered one of the worst films ever made. But its campy screenplay, wildly over the top performances, gratuitous nudity and overall cheez factor make this the “Batman and Robin” of Vegas films, and it’s so iconic, we couldn’t leave it off the list (sorry, “Rain Man

9) Fear and Loathing in Las Vegas

seemed built for Vegas. Terry Gilliam’s adaptation of his 1971 story stars Johnny Depp as Thompson stand-in Raoul Duke and Benicio Del Toro as his attorney, Dr. Gonzo. An assignment to cover a motorcycle race in Vegas becomes secondary to a drug-fueled bacchanal that pushes the limits even for that town. The movie is only a partial success, as even a visionary director like Gilliam has a hard time conveying the non-stop hallucinogenic bender without it becoming tiresome, and Depp’s affected performance is even more cartoony than Jack Sparrow. Still, the film’s literal lounge lizard take on Vegas as a boozy, three-ring circus of neon overindulgence is distinctive.

(1974)
When ailing mafia Don Vito Corleone’s (Marlon Brando) beloved son Michael (Al Pacino) takes over, one of the first things he does is fly to Vegas to tell Moe Greene that the Family is going to buy his share of the casino and hotel they bankrolled and move out west. Fredo Corleone, who’s been working with Moe, has become a bejeweled cliché, and when he sets up a swingin’ welcome for his baby brother, he gets his first (but not final) taste of how for Michael… it’s only business.

In “Part II,” Vegas and Reno are the cornerstones of Michael’s business plan. Not only will taking control of casinos bring a huge influx of money to the family, it’s a move towards fulfilling Vito’s dream of becoming legitimate. Unfortunately for Michael, not everyone’s willing to cooperate. Ironically, in the sequel, there’s actually not one scene that takes place in Vegas, but it’s still a central figure in the classic film. 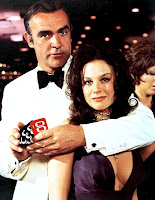 (1971)
Let’s face it, it’s hard to picture Peter Parker playing blackjack and then swinging past Glitter Gulch. No hero fits Vegas better than James Bond. Sean Connery returns to the role that made him famous, again tackling Ernst Stavro Blofeld (Charles Gray) as he accumulates diamonds to fuel a laser-equipped satellite capable of destroying a major city from space! The trail leads 007 to Vegas, where he teams with jewel thief Tiffany Case (Jill St. John) and reclusive billionaire Willard Whyte (Jimmy Dean) to save the day. Naturally, there’s time for gambling, drinking, womanizing and an amusing car chase down the Vegas Strip in which Bond puts a Ford Mustang up on two wheels. Still, “Diamonds” is one of the weakest Bond films, which makes us wonder if perhaps he isn’t due for a return visit…

(2003)
In this grim fairy tale, William H. Macy plays Bernie Lootz, a goblinesque bad luck charm paying off his gambling debts by working as a “cooler” at the Shangril-La Casino. Bernie’s aching to get out of town, much to the dismay of his boss, Shelly (Alec Baldwin), who forces comely cocktail waitress Natalie (Maria Bello) to try to change his mind. Natalie’s charms do the trick, but once Bernie falls in love, his luck starts changing…. along with that of the gamblers he’s trying to cool. The movie is both bleak and sentimental, fitting for a film that laments the replacement of the debauchery of old Vegas with the family-friendly theme park it was becoming at the time.

(1995)
As a town that embraces destructive behavior, Vegas is the perfect setting for Ben Sanderson’s plan. Sanderson (Nicolas Cage) is a Hollywood screenwriter whose alcoholism has cost him his family. Despondent, he decides to drink himself to death (literally) in a Vegas hotel. Ben finds a comforting angel in Sera (Elizabeth Shue), a prostitute who develops a codependent relationship with him. It’s an unconventional, unconditional love story that’s painfully moving and beautifully acted. The movie’s distinctive vérité quality is enhanced by being filmed in 16mm, with numerous location shots done quickly in one take because of a lack of permits.

(1991)
Few cities in the world have an exciting origin story, and fewer still involve gangsters. Warren Beatty stars as Ben “Bugsy” Siegel, the man who “created” Las Vegas. Siegel, an egotistical, hot-headed New York gangster is sent out west on business, where he quickly falls under the spell of Hollywood’s glamour. Bugsy (don’t call him that to his face) sees a run-down gambling den in Vegas as a wasted opportunity, and sets upon spending the mob’s money to build a giant casino, the Flamingo, assuming that people will come from far and wide to gamble their life savings in a remote, isolated place where anything goes. The thing is, some investments take time to mature, and if it’s one thing the mob lacks, it’s patience. As with all historical dramas, the movie plays with the facts, but it’s nonetheless a mesmerizing portrait of obsession, narcissism and self-destruction.

(1995)
Director Martin Scorsese takes a trip out west in this tale of the rise and fall of gangster Sam Rothstein (Robert De Niro) and the mob’s struggle to maintain control of Vegas casinos in the 1970s. Playing alongside DeNiro are Joe Pesci as Sam’s psychopathic lifelong pal Nicky and Sharon Stone as Sam’s conniving wife Ginger, making a triumvirate of indelible performances in a movie whose sum is not quite as great as its parts. A not-quite-love triangle bogs down the last third of the film, but watching Scorsese’s gritty style in the gaudy ‘70s Vegas setting is not dull for one second.

(1964)
Elvis Presley plays Lucky Jackson, a guitar-slingin’ race car driver who rolls into Vegas for the Grand Prix, but finds three problems: His engine’s dead, he faces a challenge from Count Elmo Mancini (great name) and he’s overly distracted by swimming pool manager Rusty Martin. Rusty’s played perfectly by Ann-Margret, truly one of the ‘60s most swingin’ chicks and the palpable chemistry between her and the King isn’t acting… they did a whole lotta shakin’ offscreen, too. This candy-coated confection has everything you expect in an Elvis flick and more… and Las Vegas never looked more fun onscreen. Well, maybe once…

(2001) (pick one)
Let’s face it, Vegas is all about swagger and no film ever swaggered swankier than the Rat Pack’s 1960 heist opus, “Ocean’s 11.” Frank Sinatra plays Danny Ocean, a cool cat in an orange cashmere sweater who leads his old army buddies (including Dean Martin, Sammy Davis Jr., Peter Lawford and Joey Bishop for giggles) in an elaborate plot to rob five Las Vegas casinos at the stroke of midnight on New Year’s Eve. The movie’s no “Godfather,” but only the stiffest clyde can deny its boozy charm. And yes, we’ll cop that the 2001 “Ocean’s Eleven” is pretty cool, too. But that Clooney-Pitt-Damon-Roberts-etc. ensemble is a good metaphor for what’s happened to Vegas. The original 1960 film was a goofy lark, made by a bunch of guys, most of whom in the off hours were actually drinking, gambling and hangin’ out with boozy broads until the wee hours. The ultra-slick new film may have had a more feasible script and better production values, but it feels too much like a big Hollywood product. It’s not a bad movie, but it’s not half as fun as the original.