Paul Giamatti has played some distinctive parts in his film career, from Andy Kaufman’s comic accomplice Bob Zmuda in “Man on the Moon

” and the simian Limbo in “Planet of the Apes

,” Paul gets to step into the red pants of one of the most iconic characters in culture: Santa Claus. As the holiday season begins to rev up, we thought we’d stuff a stocking with our ten favorite movie Santas!

TV specials featured a crusty Kringle), but there’s something particularly amusing in casting Lou Grant as the man in red. Ed Asner (who also voiced Santa in the animated TV special, “Olive the Other Reindeer

”) has a world-weariness to him in Jon Favreau’s retro Xmas tale. When he warns human elf Buddy (Will Ferrell) of the perils of civilization (gum on the street is not free candy), you get the feeling that while he’s not about to give up the job, Santa’s just about had it with us silly mortals. And who can blame him? Barely any of us believe anymore (betcha Ted Baxter does).

9) Oliver MacGreevey in “Tales from the Crypt

” (1972)
Still, Asner’s Santa isn’t likely to chop up anyone with an axe. The same can’t be said of the deranged Claus from the 1972 anthology adaptation of the classic 1950s EC horror comics. In “All Through the House,” Joan Collins plays a desperate housewife who kills her hubby with a fireplace poker on Christmas Eve, but finds that she can’t dispose of the body due to an escaped homicidal maniac in a Santa suit hanging around outside. This was the beginning of a whole slew of slasher Santa flicks, from the “Silent Night, Deadly Night

,” and while it’s a genre we don’t love, this first entrant is enough to give even Cindy Lou Who the willies.

8) Jeff Gillen in “A Christmas Story

, but it’s indelible. As seen through the terrified eyes of the kids overwhelmed by the garish plastic North Pole and pressured to hurry with their gift requests by surly teenagers in elf costumes, Santa is far from jolly. He’s a bellicose, intimidating red monster who sends screaming tots down a plastic slide to holiday hell after crushing their dreams! Ho oh No!

7) Unknown in “The Night Before Christmas

” (1905)
This silent Edison short was the first screen adaptation of Clement Moore’s classic poem, featuring a Santa who, despite wearing a polka-dot coat and mismatched pants, is a fully-realized image of the icon. While the name of the actor in the Santa suit has been lost to time, the film (by director Edwin S. Porter) is unforgettable, with its then-revolutionary cross-cutting between two stories (Santa preparing for his journey and a family readying for bed) and simple, yet mesmerizing miniature effects.

6) James Cosmo in “The Chronicles of Narnia: The Lion, the Witch and the Wardrobe

” (2005)
In 2005’s adaptation of the C.S. Lewis tale, Father Christmas is an arms provider to the Pevensie kids, giving them weapons to aid in their struggle against the evil White Witch. This Santa’s a brown-clad, earthy, slightly foreboding guy (he initially scares the bejeezus out of the wardrobe-travelers), definitely the most butt-kickin’ Santa on our list. Except for maybe…

” (2003)
One can only imagine the catharsis this film holds for anyone who’s ever had to don a Santa Suit and endure the mewling queues of avaricious children crawling all over them. As the thief who, with the aid of his elf accomplice, uses Santa jobs to gain access to department stores in order to rob them, Billy Bob Thornton is gloriously profane, a drunken slice of pure id with no self-control or shame. That is, until a pathetic kid named Thurman Merman teaches him that it sucks to be a selfish a-hole. Hey, we’re just using Santa’s vernacular!

4) Professor Grampy in “Christmas Comes But Once a Year

” (1936)
The revolutionary Fleischer Studios produced this charming short using their “tabletop technique,” in which animated cels lay over actual 3D sets. One Christmas morning, a traveling inventor named Professor Grampy comes across an orphanage too poor to afford decent presents for the kids. So The resourceful Grampy utilizes items from the kitchen to create toys: a washboard is turned into a sled, a frying pan becomes a banjo, a percolator and tea set becomes a toy train. Grampy then fashions a Santa suit for himself and bestows the goodies on the thrilled tots. The cartoon ends with a singalong in front of a rotating tree (made from nesting green umbrellas stuck on a victrola) that elicits “oohs” to this day. But we have to wonder… where the heck is the orphanage staff in this thing?

3) Jack Skellington (Chris Sarandon) in “The Nightmare Before Christmas

” (1993)
We’re choosing Halloweentown’s Pumpkin King’s imitation of Santa over the genuine article in Tim Burton and Henry Selick’s stop motion holiday crossover tale because, let’s face it, he brings a fresh perspective to Christmas. Who wouldn’t prefer a shrunken head to a pair of socks? Jack may find the bright, joyful shiny Christmas to be exciting, but he still can’t let go of his Goth roots, which is why he many consider him to be the only cool Santa on this list. 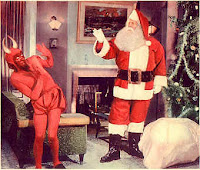 ” (1959)
Oh, how we love this oddball Mexican film pitting Santa Claus against a mischievous devil named Pitch, out to ruin the holiday. The movie presents Santa as a sort of outer space overlord, with children from around the world replacing the typical elves as his slave labor, keeping tabs on boys and girls with Dali-esque spy devices. Santa rides his terrifying robotic reindeer to Mexico where he does slapstick battle with Pitch, rewards a poor little girl with a giant doll and drugs some wealthy, but neglectful parents with a mickey that readjusts their priorities. Truly, magically, wonderfully bizarre. 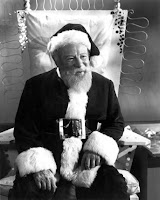 ” (1947)
Choosing anyone else would be ridiculous. While some dismiss this holiday classic as saccharine-pap, it’s actually a sometimes-dark film, portraying humankind as often petty, selfish, narrow-minded and cynical. Gwenn plays a harmless mental patient who believes he’s really Kris Kringle, and winds up working the red suit for Macy’s when their Santa proves too soused to Ho-Ho-Ho. Kris’ insistence that he’s the genuine article (and refusal to compromise Santa’s integrity) creates difficulties for the angry in-store shrink, Mr. Macy and the cynical woman who hired him. But when a resourceful young lawyer proves in court that Santa exists, all cynicism melts away. The film works due primarily to the amazing performance of Gwenn, whose charming mixture of humor, wonder, compassion, intelligence and even strength makes him eminently believable to everyone, both onscreen and in the audience. Simply stated, the perfect Santa.