All Aboard for 10 Memorable Movie Train Rides

” follows three estranged brothers on a spiritual journey across India via that most evocative of transportation methods, the train. Many movies have featured dramatic, hilarious or romantic railroad journeys, so narrowing it down to cinema’s ten most memorable train rides is tricky… but we’ll do our best to choo-choo-choose them.

(1976)
Gene Wilder plays George Caldwell, a dull book editor who takes the titular train from Los Angeles to Chicago, hoping for a quiet, peaceful trek. But after witnessing a murder on board, he becomes the target of an evil art thief played by Patrick McGoohan. This Hitchcock-lite, despite featuring a fairly exciting climax involving a spectacular train crash, is mostly notable for being the first pairing of the classic (if short-lived) comedy team of Gene Wilder and Richard Pryor (playing a thief who helps Wilder elude capture in part by teaching him how to be black).

(1965)
In this WWII drama, Frank Sinatra plays US Air Force Colonel Joseph Ryan, held in a POW Camp in Italy alongside a group of British soldiers. When Italy surrenders, the prisoners are transported via railroad to Germany. But, led by fearless Frankie, the Allies take over (and we mean ALL over) the train and what follows is some extraordinary, action-packed location shooting through most of Italy, including a sequence in which the train is attacked by Nazi fighter planes! (For another tense WWII era train ride, check out John Frankenheimer’s “The Train

8) Back to the Future Part III

(1990)
The final film of the time travel trilogy finds Marty McFly (Michael J. Fox) driving the Delorean from 1955 to 1855 in order to save the stranded Doc Brown (Christopher Lloyd) from being killed by Biff’s great-grandfather Buford Tannen (Thomas F. Wilson). When it comes time to again go back to the future, the out-of-gas Delorean needs a push from a speeding locomotive to get up to time-barrier-breaking speed. But that train ride’s nothing compared to the time-traveling locomotive that Doc Brown invents to journey (with his wife and kids) from the old west around the time-space continuum. 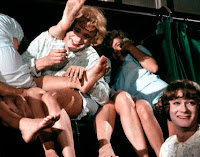 (1959)
After witnessing Chicago’s infamous 1929 St. Valentine’s Day mob hit massacre, struggling musicians Joe (Tony Curtis) and Jerry (Jack Lemmon) need to lam it outta town fast. To that end, the broke musicians take the first job they can get, which turns out to be playing in an all-girl band. Buried under makeup, wigs and other sundry prosthetics, “Josephine” and “Daphne” board a train bound for Florida with the rest of the girls, including the va-va-voomy singer Sugar Kane Kowalczyk (Marilyn Monroe). As the girls squeeze into their cramped berth and start getting ready for bed (there’s barely room for Marilyn), things indeed start to get hot, enough that the Catholic League of Decency gave the film a “C” for Condemned.

(1996)
The climax of Tom Cruise’s first outing as IMF agent Ethan Hunt finds the superspy battling his ex-boss Jim Phelps (Jon Voight) on France’s high speed TGV line. As their fight continues onto the roof of the train, you can’t help but marvel at how the combatants can keep their footing on a vehicle traveling over 300 mph! Still the awe-inspiring sight of a tethered helicopter being dragged by the train into the UK-connecting Chunnel hammers home the safety advantages of rail vs. air travel.

(1938)
The train setting plays prominently in many of Alfred Hitchcock’s films, including his penultimate British thriller. On a journey from Austria to London, a young playgirl named Iris (Margaret Lockwood, giving a smart, sexy performance decades ahead of her time) awakens from a nap to discover that her new friend, the matronly governess Miss Froy (Dame May Whitty) has disappeared. Only nobody on the train seems to remember the woman existing… or so they say. With the help of musical anthropologist Gilbert (Michael Redgrave), Iris unravels a conspiracy and rescues Miss Froy, who turns out to be a British secret agent conveying some McGuffinesque “vital information.” The 2005 thriller, “Flightplan

” has much in common with this wildly entertaining mystery, purportedly by coincidence (we say: Suuure).

4) Murder on the Orient Express

(1974)
Sidney Lumet directed this star-studded adaptation of the 1934 Agatha Christie mystery, set aboard the legendary luxury line that ran from Istanbul to Paris. Albert Finney plays detective Hercule Poirot, traveling aboard the train when American millionaire Sam Ratchett (Richard Widmark) is stabbed in his cabin (and if you’ve ever been stabbed in your cabin…). It’s up to the erudite Belgian sleuth to deduce the killer amongst an ensemble including Ingrid Bergman, Michael York, Lauren Bacall, John Gielgud, Anthony Perkins and Sean Connery, all gleefully hamming it up in this period whodunit (for which Bergman won an Oscar).

3) From Russia with Love

(1963)
Sean Connery made another dangerous trek on the Orient Express nine years earlier in James Bond’s second film, “From Russia with Love.” While transporting a beautiful Russian defector (and the Lektor cryptographic device) to England, 007 is attacked by SPECTRE assassin Red Grant (Robert Shaw) in the cramped confines of Bond’s stateroom. The incredibly brutal fight was filmed not using stunt people, but the actors, who begged to do it themselves.

(1959)
New York ad writer Roger Thornhill (Cary Grant) is not having a good day. After being mistaken for a government agent by foreign spies, he’s falsely accused of murdering a diplomat at the UN. Fleeing from the police, he boards a train at Grand Central Station and soon finds a curious ally in the form of an icy blonde named Eve Kendall (Eva Marie Saint). A saucy seduction unfolds over a Gibson and brook trout in the dining car, followed by dessert in Eve’s drawing room. Roger’s suspicious of Eve’s interest in helping him (outside of simple lust), and with good reason: She’s the head spy’s mistress, doing double agent duty for the feds. Arguably Alfred Hitchcock’s most entertaining film also ends with what may be the first use of the now clichéd “train entering tunnel” metaphor.

(1964)
As hard as it is to imagine James Bond using public transportation, it’s even stranger to contemplate the biggest rock group in the world taking the train. But in the Beatles’ first picture, the fab four ride the rails with Paul’s troublemaking (but clean) grandfather, snooty businessmen, and of course, adoring, screaming birds (that’s British slang for girls, kids). For the Beatles at this time, the world was a playground, and the lads make a simple journey by rail seem like an anarchic joyride. But seriously, can you imagine U2 taking Amtrak?