I've Got a Bad Feeling About This... (30 Reasons Why STAR WARS Sucks)

I will speak the heresy: I am a lifelong Geek who doesn’t like “Star Wars.” Oh, sure, as a kid, I was obsessed, I had the toys, the comics, the T-shirts and posters. But over time, with perspective, I’ve come to “trust my feelings” that the Star Wars Saga

(yes, even the originals) is pretty bad. Come with me, my padawan, as we journey through the internal chronology to discover the poopiness of the Force! 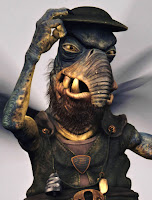 EPISODE I: THE PHANTOM MENACE

• “The taxation of trade routes to the outlying star systems is in dispute.” Zzzzzzzzz…
• The immaculately-conceived (!!!) young Anakin doesn’t seem overly concerned about leaving his slave-Mom behind on Tatooine, typical of the stilted relationships in these films.
• Boy, Jedi sure have bad hair.
• The discomfiting Watto

may not have been intentionally designed as an anti-Semitic stereotype, but he sure comes off as such.
• And of course, Jar-Jar Binks

. A CGI personification of George Lucas’ isolation in a universe of Yes-Men (nobody suggested to him this character was a bad idea?), JJ isn’t funny or endearing, he’s annoying (and yes, offensive) enough to make C-3PO

EPISODE II: ATTACK OF THE CLONES

• Enter the immensely dislikable teen Anakin, whose saving grace is that he sounds like Christopher Walken (imagine if Lucas had Walken re-dub James Earl Jones’ dialogue as Vader!).
• The love scenes between Anakin

are cheesier than any romance novel.
• The term, “younglings” is introduced, presumably to make their extermination in the next film a bit more semantically palpable than “Anakin killed all the baby Jedi!”
• Is Palpatine’s secret identity of Darth Sidious

really supposed to be a mystery?
• Despite a valiant attempt on the FX crew to make the light saber duel between Yoda

EPISODE III: REVENGE OF THE SITH

• The opening battle over Coruscant is endemic of Lucas’ compulsive drive to fill every frame with sensory overload: too many ships, too many droids, too many explosions, too much music. Make head hurt.
• R2-D2

uses a cell phone?
• More shmoopy dialogue between Anakin and Padme. “Hold me like you did by the lake on Naboo, so long ago when there was nothing but our love!” These characters are as inherently annoying as the homecoming queen and her angry jock boyfriend, a regime that happily never lasts.
• Ultimately, the obviously manic-depressive Anakin is willing to go to the Dark Side because of little more than a bad dream. If they’d have had anti-depressants a long time ago in a galaxy far, far away, this whole mess could’ve been avoided.
• As always, the climax is amazingly unsatisfying. A perfunctory, mostly dialogue-free montage gives exposition and ties up loose ends (“Have the protocol droid’s mind wiped.”), setting the stage for Episode IV, but there’s no heft. The final shot should’ve been Vader and the Emperor looking at the Death Star

construction and gloating over the destruction of the Jedi. Instead we get Owen and Beru looking at the sunset. Sunsets. Suns-set? Whatever. 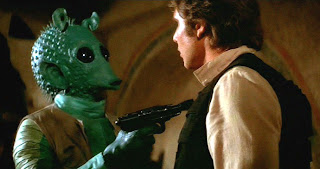 : The whiniest hero in pop culture history (he is his father’s son).
• I’m sorry, but Darth Vader

… is silly looking. With his little silver button nose, chicken wire respirator, chest control panel (why didn’t anyone ever just throw a rock at this thing and end his evil reign?) and a belt that evokes a cell-clip-wearing uncle, he makes me chuckle.
• Greedo

shoots first. Sheesh.
• They couldn’t squeeze in one minute for Princess Leia

to mourn her entire PLANET after the Death Star destroys Alderaan? No, “We have no time for our sorrows.” Besides, our screenwriter is inept at conveying human emotion!
• As part of the complete continuity, the film suffers from Obi-Wan

’s seeming senility. Despite saving Luke from the Sand People (by waving his arms and shouting?), Kenobi doesn’t seem like he’s been spending the past 20 years watching over the titular New Hope. Obi-Wan doesn’t even seem to remember his Jedi name!
• Oboy, a Leni Riefenstahl homage as climax!

EPISODE V: THE EMPIRE STRIKES BACK

• The stop motion Tauntauns look like something Hermey the Elf would ride.
• Luke and Leia’s smooch is creepy even without knowing they’re siblings (when is George gonna digitally erase that saliva string?).
• Apparently, Jango Fett

was the worst shot in the galaxy, as the stormtroopers (assuming they’re clones of the bounty hunter) couldn’t hit the side of a Sandcrawler.
• More retcon problems: Why doesn’t R2-D2 recognize Yoda? Why does Yoda have to tell Obi-Wan “there is another?” And since Palpatine told Vader that he’d killed the pregnant Padme, when did Darth discover he had a son?

EPISODE VI: RETURN OF THE JEDI

seem as threatening as the Great Gonzo. The Sarlacc looks straight outta “Little Shop of Horrors.”
• Artoo’s circular saw extension is as ludicrous as Bat-Shark-Repellant.
• More awkwardly scripted drama: “Luke, you have a sister.” “No shit. Bet it’s Leia.” I’m paraphrasing, but this important plot point is revealed with no impact whatsoever.
• Ewoks

suck. Also, Endor’s primitive forest world is a very unspectacular setting for the climax of a series that’s called “STAR Wars.”
• Why does every single episode end with people just kinda standing around? There’s not one good final line in any one of these movies, which speaks volumes about the lack of importance placed on dialogue.

Okay, I grant that some of these beefs are more with the state of technology than anything else, and I could forgive the muppet-esque aliens if everything surrounding them didn't likewise feel as fleshed out as an episode of SESAME STREET. I also realize that so-called “Expanded Universe” stories in other media have filled in some of these blanks and even fleshed out the cardboard characterizations, but the movies need to stand on their own. And, with the possible exception of ESB, they don’t.

Still, Lucas acolytes worship the series with a forgiving, religious fervor that frankly baffles me. I realize that writing this piece may put a bounty on my head. I hope they send Bossk