,” Luke Wilson and Kate Beckinsale play a couple who check into an isolated motel only to discover that they’re the latest guests slated to become unwilling stars in the motel’s series of homemade snuff films. Our guess is that it’s not rated well by AAA. But then again, in movies, there are tons of places that weary travelers should just pass by. Here’s our list of the top ten stops that are anything but restful.

10) The Peep-Show Hotel in “Garden State

-soft that the scuzzy scene at the hotel in which creepy onanistic voyeurs spy on fornicating guests through holes in the wall from a back hallway seems even dirtier than Vincent Gallo’s skivvies. So remember, kids, if you happen to be passing through the Dirty Jerz, make sure you check your hotel wallpaper for peep holes!

9) The motel in “Identity

” (2003)
Ten strangers get stranded at a run-down Nevada motel when a freak rainstorm washes out all the roads. It’s a motley crew: a has-been actress, her limo driver / ex-cop, a gambler, a hooker, a mean cop transporting a killer to jail, newlywed couple already having troubles and a seemingly innocuous nuclear family. The weird coincidence is that they all share the same birthday. Unease turns to distrust and paranoia when the reluctant guests start turning up murdered and fingers are pointed in every direction. But don’t worry… as the pretty good plot twist reveals, the chances of you ending up at this particular place of lodging are pretty slim.

8) The Dry Gulch Hotel in “Claws for Alarm

” (1954)
In this hilariously violent and slightly disturbing Warner Bros. cartoon, traveling companions Porky Pig and Sylvester the cat spend the night at a hotel that’s deserted save for a group of homicidal rodents. Murderous mice try to hang, shoot, slash and scare the pants off the Looney duo. Oh, wait…. They don’t wear pants.

7) The Hotel Largo in “Key Largo

” (1948)
The Florida Keys are fraught with danger: Bugs the size of your foot, painful stones instead of soft sand, feral six-toed cats lurking around every corner and overpriced everything. But those perils pale compared to what faces you if you check into your old army buddy’s seaside hotel after it’s been taken over by a group of violent gangsters. That’s what happens to Frank McCloud (Humphrey Bogart) in John Huston’s noir-gangster film. Exiled gangster Johnny Rocco (Edward G. Robinson) needs to get back to Cuba after delivering some counterfeit money, but a violent storm is holding him in Florida and putting him on edge, and he’s taking it out on everyone around him. When one of those people is ultimate tough guy Bogey, that’s not a good idea.

6) The seedy desert motel in “Touch of Evil

” (1958)
Orson Welles’ corruption thriller features a number of bad choices. First, why do honeymooning cop Miguel Vargas (Charlton Heston) and his pretty wife Susie (Janet Leigh) choose to stop in the most violent, dangerous border town in Mexico? Second, when Mike gets mixed up in a local investigation involving drug-dealing gangs and murder, why would he check his wife into a seedy motel run by one of the gangs? As if the creepy, leery desk clerk (Dennis Weaver) weren’t enough of a warning sign! So it’s no surprise when Susie finds herself the victim of a most unpleasant housekeeping check. Oh, and the third bad choice: Having Charlton Heston play a Chicano!

5) The Motel Hello in “Motel Hell

” (1980)
There’s rarely a vacancy at the Motel Hello, at least according to the sign outside the rural lodging run by Farmer Vincent (Rory Calhoun) and his sister Ida. The overall-clad siblings are also well known for their distinctively delicious smoked meats. The secret recipe? Capture passing motorists, slit their vocal cords, bury them up to their necks in the flesh garden out back until they’re ripe, then slaughter and cure accordingly. Hey, at least it’s not a bed and breakfast!

” (2005)
Every year, thousands of young people toss a few belongings in a backpack and venture on horizon-expanding treks through foreign lands, relying on the cheap communal lodgings known as hostels for a place to lay their heads for the night. But we’re willing to be that the number of curiosity-seeking kids dwindled at least a little after Eli Roth’s “Hostel,” in which three über-obnoxious dudes become the torture-toys for rich sadists. Then again, if you’re as stupid, misogynist and racist as the ugly Americans in “Hostel,” you DESERVE to be poked with a power drill. 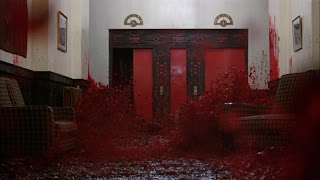 3) the Overlook Hotel in “the Shining

” (1980)
It’s too bad the winters can be so brutal in Denver. Otherwise the enormous, isolated Overlook Hotel could stay open for ski season and allow visitors year round access to its amenities, including the hedge maze, haunted ballroom, friendly dead twins and blood-gushing elevators! Stephen King may not have approved of Stanley Kubrick’s adaptation of his best-seller

, but for millions of moviegoers, Room 237 will always be off-limits!

2) The Hotel Earle in “Barton Fink

” (1991)
Barton Fink (John Turturro) is a very serious New York playwright who finds himself lured to Hollywood to take a crack at screenwriting. But his first assignment, a wrestling movie, prompts a serious case of writer’s block. But Barton’s not working in the most inspiring surroundings. His room at the Hotel Earle is a dank, dark, stinking hot place, with peeling wallpaper, insects, mysterious dripping goo, the creakiest bed in the world and a bellicose neighbor (John Goodman) whose overly friendly nature belies the fact that he’s a serial killer. Oh, well, at least they shine your shoes for free!

1) The Bates Motel in “Psycho

” (1960)
Obvious, yes, but is there any more iconic creepy lodging in the history of film? However, the hotel manager, Norman Bates (Anthony Perkins) seems like such a nice young man. He even offers to make you a sandwich and have a chat about taxidermy and mental institutions! And the place is nice and peaceful, considering nobody else seems to be checked in. And it’s been such a long, exhausting drive through the desert. You know what would be great? A nice, long, relaxing shower…

Later this summer, in addition to “Hostel: Part II