The Baddest Badmen from the Cinematic Wild West

,” Russell Crowe takes the reins of captured badman Ben Wade from Glenn Ford, who played the part in the 1957 original

. Crowe certainly brings some bad boy baggage to the big screen from his real life antics, but how will he measure up in the pantheon of Western Badmen of the Movies? Let’s round ‘em up!

” (1992)
In Clint Eastwood’s Oscar-winning revisionist western, Gene Hackman plays a corrupt small town sheriff so evil he makes Lex Luthor look like Jimmy Olsen. The law is a malleable concept for Daggett, who thinks nothing of killing anyone who challenges his authority, and then maybe putting their corpse on display just to remind the folks who’s in charge. Hackman is the pitch black hole in the center of a movie full of moral ambiguity and challenged notions of good and evil. 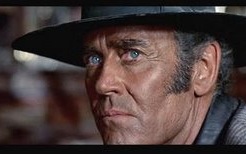 ” (1968)
Another Leone oater, this western the public for a loop by casting perennial good guy Henry Fonda as the blue-eyed villain against the brusque and frightening Charles Bronson as the hero. Fonda was reluctant to play against type but was wooed by Leone as well as the next actor on our list, who advised Fonda that playing evil was a ton of fun. The juxtaposition works; Fonda is a chilling villain. 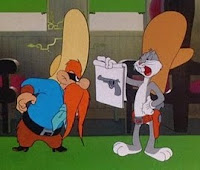 ” (1945)
Laugh if you will at the pint-sized desperado (voiced by the brilliant Mel Blanc) who needs a rope ladder to get onto his horse... this rootin-tootin’, meanest, toughest, rip-roarin’-est hombre that ever packed a six-shooter has one thing going for him that only one other badman on our list can claim: Resiliency. No matter how many times the Bugs Bunny foil blows up, falls down a mine shaft, gets hit by a train or shot by a hail of bullets, Sam always bounces back. Which reminds us of…

” (1973)
In the near future, wealthy thrill seekers will enjoy the amenities of Delos, the ultimate interactive amusement park, featuring historical settings in which visitors can mingle (and we mean MINGLE) with lifelike robots. In the Westworld wing of Delos, Peter Martin (Richard Benjamin) has already won a few shoot-outs with a particularly nasty robot gunslinger when a glitch in the system causes the robots to ignore their programming against harming human beings. Oops. As the cold, stoic killer, Brynner builds on previous memorable turns in movies like 1964’s “Invitation to a Gunfighter

” (1965)
Clint Eastwood’s Man with No Name teams up with Col. Douglas Mortimer (Lee Van Cleef) to earn the bounty on the head of El Indio, the most feared badman in the west! Seems that El Indio, in addition to being a thief and a rapist, is addicted to marijuana, which send him into crazed, drug-induced madness! Sergio Leone’s second film in the “Dollars” trilogy finds Van Cleef gearing up to play an entirely different role in the next film…

Lee Van Cleef as Angel Eyes in “The Good, the Bad and the Ugly

” (1966)
Van Cleef plays the middle adjective in Sergio Leone’s classic spaghetti western (the final in his “Dollars” trilogy), the tale of three gunslingers out to find a fortune in buried gold. Angel Eyes is a blackhearted mercenary, a hitman with an itchy trigger finger, a snake’s stare and a grudge against everyone, especially his rivals for the hidden loot, whom he faces down in the film’s legendary three-way climactic showdown.

” (1952)
In director Fred Zinnemann’s classic parable about McCarthyism, the villainous Frank Miller (no, not that one), fresh out of jail, is coming to seek revenge on the man who sent him away. But all the newly-retired Marshall Will Kane (an iconic Gary Cooper) wants is to live a peaceful life with his new Quaker bride (Grace Kelly). Since nobody else in town has the guts to stand up to the sociopathic killer, it’s up to Will (and a few good women) to save the town. Ian MacDonald doesn’t have the malevolent veneer of most classic western badmen, but in a way that underscores the cowardice of the townsfolk. 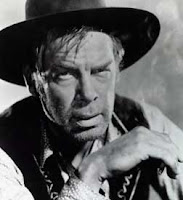 Eli Wallach as Calvera in “The Magnificent Seven

” (1960)
Okay, so it’s set in Mexico, but John Sturges’ American remake of “The Seven Samurai” still ranks as one of the greatest Westerns ever made. Eli Wallach is mesmerizing as the lead bandit Calvera, a man so black of heart that even as he lies dying, he cannot grasp the motivations of a selfless man. Still, it, it takes some major cojones to take on Yul Brynner, Steve McQueen, Charles Bronson and James Coburn! 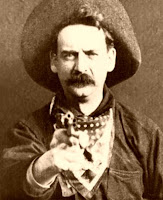 ” (1903)
Justus is on this list because, despite “The Great Train Robbery” being a mere 12 minutes long, no western bad guy ever terrified an audience more. In a dramatic shot (that the distributor said could be placed at the beginning or end of the movie), Barnes’ unnamed bandit takes his pistol and fires it straight at the audience. Some, shall we say, less savvy filmgoers of the early 20th century reacted in sheer terror as if they were actually going to be shot. Good thing they didn’t live long enough to see Sam Peckinpah’s “The Wild Bunch